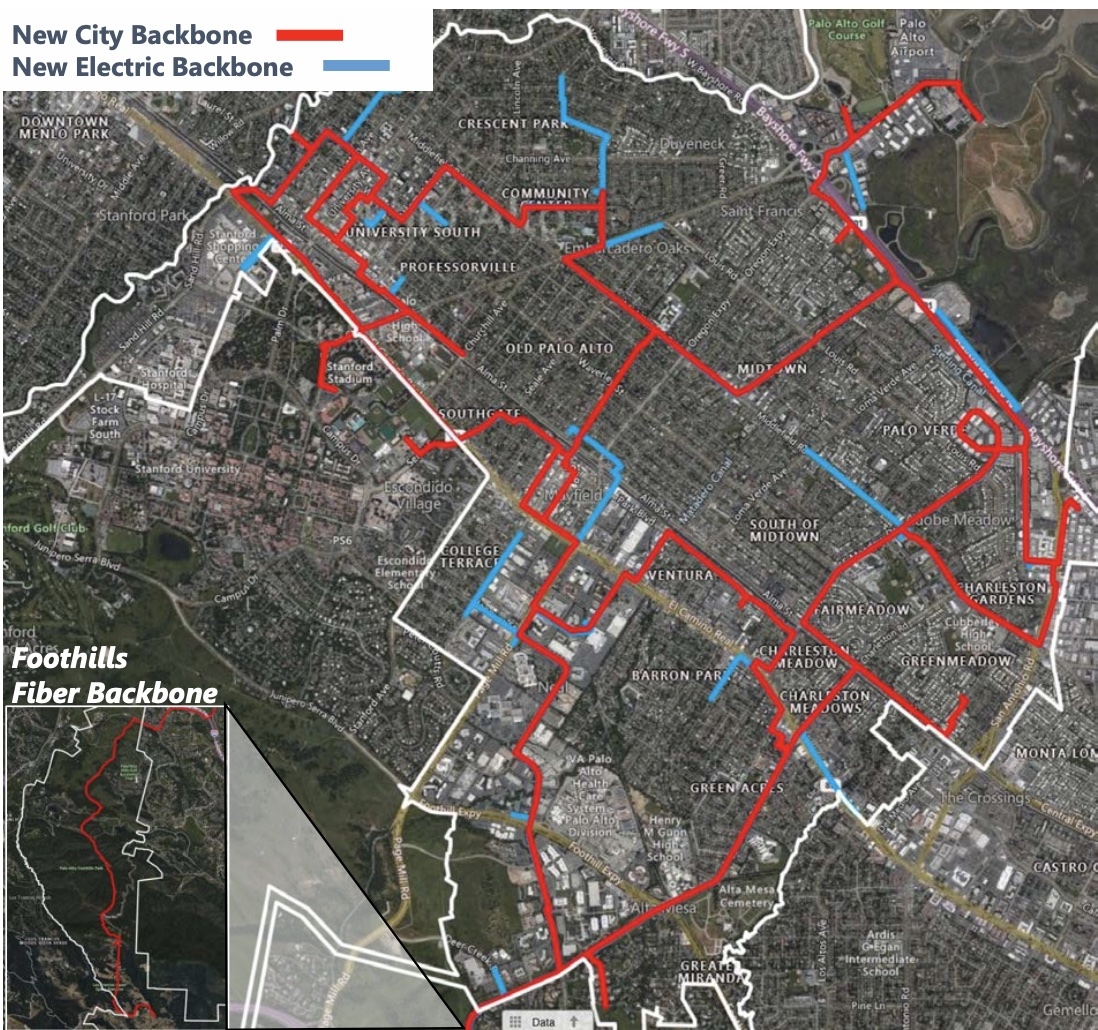 Under a proposal from Magellan Advisors, Palo Alto would expand its existing fiber network into a 43-mile fiber backbone, which would later be used to create a Fiber to the Home system. Courtesy Magellan Advisors.

After nearly two decades of debate, Palo Alto took a significant step Monday toward transforming the city’s fiber system from a small network that mostly serves critical city facilities and large commercial customers to one that could deliver high-speed internet system to every local home and business.

By a unanimous vote, the City Council advanced a work plan for gradually expanding the city’s existing fiber ring to all areas of the city — a project that over the years has been referred to as Fiber to the Home or Fiber to the Premises. The expansion would take place in at least two phases, with the first one focusing on expanding the fiber backbone to make it available for more city departments and the second one targeting neighborhoods throughout Palo Alto.

The idea is far from new. City officials have long considered expanding the fiber network, which was established in 1996 and which now serves about 220 commercial customers and generates about $4 million in annual revenues. To date, however, the journey has been filled with false starts, half-measures and disappointments. In 2009, the city’s prospective partnership with a consortium of tech firms for the buildout of the fiber network collapsed because of the economic downturn. Since then, officials have been considering different models for the fiber expansion and commissioning numerous studies in the process, only to return inevitably to step one.

This time, city leaders and proponents of Fiber to the Premises believe things are different. The COVID-19 pandemic, they argued Monday, has demonstrated both the critical value of having reliable high-speed internet and the shortcomings of existing providers in meeting local demand. And a new study from the firm Magellan Advisors, which has worked with dozens of municipalities to develop municipal fiber networks, makes a case that a municipal fiber system would not only enhance all sorts of city services — from traffic management to emergency preparedness — but also generate money and improve the customer experience.

The study estimated that it would cost about $22 million for the city to roughly double the fiber network in the first phase of the expansion, an endeavor that could be paid for at least in large part through the fiber utility’s existing reserve of nearly $35 million. This would create a 44-mile fiber network that flows through neighborhoods and business districts and that includes dedicated fibers for the utility operations, for every other city department and for commercial user.

The new network would also enable expansion toward Fiber to the Home, a much more ambitious project with an estimated price tag of about $98 million. The city also has the option of teaming up with private companies — an option that would reduce both the city’s costs and its control over the network. Under that scenario, the system would cost about $86.5 million and shift some of the risk away from the city.

The council largely rejected that approach. Instead, the majority agreed that it would like to see the city build and operate its own system, much like the 63 other cities across the nation that currently provide direct internet service to their customers. Mayor Tom DuBois, a longtime champion of Fiber to the Home, said the municipal system would “pay for itself.”

John Honker, CEO of Magellan, told the council that the new plan presents the city with an opportunity to reinvest in a valuable asset — its fiber ring — at a time when the need for the city to connect more services is rapidly expanding. His company’s analysis showed that the city would need about a third of local households and businesses to plug into the system for the operation to break even. Some cities that his company has been working with have done far better than that, with Longmont, Colorado, enjoying a 54% take rate for its municipal system, he said.

The operation does, however, come with some risks — namely, stiff competition from the two incumbent providers, Comcast and AT&T, as well as smaller boutique providers. At other jurisdictions, Honker said, existing firms “took a shotgun approach” and launched negative campaigns against municipal offerings.

“They spent marketing dollars to try to dissuade each of the cities from building out, they lobbied commissioners, they lobbied the city managers, they did everything they could until the point that the project was green-lighted, and then it was just a matter of competing,” Honker said.

“It’s stiff competition because they are established companies,” he added. “But they don’t have good reputations and the reputation that they have are one of the biggest challenges that they face when going up against municipal providers.”

Utilities staff, which in the past has been hesitant to undertake a major expansion without private partnerships, similarly pointed to competition from the private sector as a major risk. The industry will “fight not to lose a single customer,” a report from the Utilities Department states.

“Private sector competition plus the City’s ability to host and support a private sector offering are considered the greatest vulnerabilities of City-provided internet services,” the report states.

Council members agreed to follow the direction of its Utilities Advisory Commission and staff and to move ahead with a massive buildout of the fiber system. The council directed staff and Magellan to provide a create a detailed engineering design for both the near-term expansion of the fiber backbone and the eventual Fiber to the Home system, as well as to create a business model for turning the city into an internet service provider, which could entail outsourcing some of the functions.

The city also moving ahead with a more detailed risk analysis and a community survey designed to gauge local interest in municipal fiber. The council’s timeline calls for having Fiber to the Home in place within five years.

Andy Poggio, a longtime proponent of the citywide system, was among those who urged the council on Monday to advance the effort.

“We all know the advantages of the municipal fiber system for Palo Alto, attracting startups and new businesses, improving age-in-place, enabling better work from home, keeping Palo Alto a uniquely desirable place to live,” Poggio said. “Let’s take this opportunity to build a 100% Palo Alto Fiber to the Home now.”

The pandemic has only strengthened the case for municipal fiber, said Loren Smith, a member of the Utilities Advisory Commission.

“Our children and our community were forced overnight to switch to a work-from-home, school-from-home, life-at-home quarantine space, all of which significantly increase the demand on our existing broadband networks — most, to unsatisfactory levels,” Smith said. “As children and parents all jumped online, existing broadband services were crippled and buckled under the strain.”

Council members largely agreed, even as they expressed some concerns about issuing debt or relying too much on the fiber reserve to pay for the expansion. Greg Tanaka, the council’s staunchest fiscal conservative, suggested looking into an “open access” model in which private providers help the city build the network and then are allowed to use it to provide services (Honker suggested that such a model is unlikely to succeed in Palo Alto because telecoms are unlikely to invest in capital costs for the city-owned system). But Tanaka, who struggled with his own AT&T-provided connection earlier in the meeting, ultimately joined the rest of the council in advancing the project.

“This year, we’ve seen how much this is needed,” Kou said, citing unstable internet connection during council meetings. “This is a great investment for our community.”