On June 23, Children’s Health Defense (CHD) filed its petitoners brief in its lawsuit against the Federal Communications Commission (FCC) re: FCC Order 21-10, the Over the Air Reception Device (OTARD) rule amendment — a rule change that allows Wireless Telecommunications Facility (WTF) Base Station Antennas to be installed on homes and homeowner association property. This rule can be used by fixed wireless information service provider companies to contract with private property owners to place point-to-point antennas on their property. 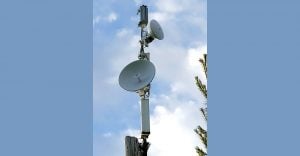 The rule amendment preempts federal and state civil rights laws that protect the disabled and their rights for accommodation and allows for non-consensual exposure of wireless radiation to be forced on people in their homes who can be severely harmed by it, and for whom it may even be fatal. Because giving notice is not required, those who are already sick from wireless radiation will likely learn about the installation of an antenna on a neighboring property by becoming sick. They may even experience life-threatening symptoms. For these people, their home is their only refuge, but the rule amendment renders even their own homes unsafe and inaccessible to them, and removes all their rights to be accommodated.

On June 23, Children’s Health Defense (CHD) filed the opening brief in its case against the Federal Communications Commission’s (FCC) “Over-the-Air Reception Devices” (OTARD) Rule Amendment, which went into effect March 29. This submission is the main brief for CHD in the case it filed on Feb. 2 in the U.S. Court of Appeals for the DC Circuit.

CHD will hold an information and Q&A session about the brief this Wednesday, June 30 at 2:30 p.m. Eastern time. Register here.

CHD is opposing the OTARD rule amendment, which allows fixed wireless companies to contract with private property owners, including homeowners, to place point-to-point antennas on their property. The rule also allows wireless companies to add carrier-grade base station antenna installations on private property to extend wireless voice/video/data service, including 5G and Internet-of-Things antennas, to users over a wide area.

The amended rule, which purports to facilitate fast deployment of wireless networks, preempts all state and local zoning laws that would otherwise apply. No application, permit or notice to neighboring properties is required. Homeowners’ association and deed restrictions are also preempted.

“The rule effectively transforms residential areas into radiation-saturated industrialized zones and creates a wireless ‘Wild West,’” explained Dafna Tachover, an attorney and the director of CHD’s 5G and Wireless Harms Project who has been leading CHD’s campaign against the rule amendment.

One of the more technical arguments used in the brief by CHD is that the rule amendment turns users into wireless carriers without any regulatory oversight, and therefore the amended rule is oppugnant to the licensing and provider/user regimes intended by Congress.

Many municipalities, organizations and individuals formally objected to the OTARD rule via public comment before it went into effect. To comply with the requirements of the Administrative Procedures Act (APA), the FCC is required to respond to these objections and provide a reasoned decision-making. CHD’s brief argued that the FCC violated the APA by failing to address the concerns that were raised and to provide significant and sufficient policy reasons to justify these sweeping preemptions.

In line with its mission, the focus of CHD’s case is the effects of the amended rule on children and adults who suffer from radiation sickness, or whose conditions are aggravated by wireless radiation exposure, such as those who suffer from seizures, ADHD, and immune or neurodevelopmental conditions.

Radiation sickness, while largely unknown, is widespread. Surveys indicate that an average of 10% of people suffer from this condition to some level. CHD’s April 2020 letter to the FCC is another indication of the extent of the problem. The submission was joined by 15,090 people, 6,231of whom declared they and/or their children have become sick from wireless radiation. CHD’s brief references a collection of 246 comments containing stories of sickness and/or death from wireless radiation.

CHD, along with four individual petitioners in the case (all of whom are sick themselves from radiation or have children or spouses who are sick), argued that the FCC failed to address “the unrebutted evidence that the amendment would directly lead to catastrophic harm for those who are uniquely or particularly injured by it,” and their exposure to such radiation can be regarded as “torture.”

Violation of their due process rights is a central argument. CHD’s brief states that the FCC rule amendment “lends color of law” to violations of procedural and substantive rights granted by other federal, state or local laws, including the Americans with Disabilities Act/Fair Housing Act and their state equivalents. It argues that the FCC preemptions are inconsistent with the policy behind these laws.

Scott McCollough, CHD’s lead attorney for the case, used strong language to describe the FCC’s actions regarding the injured. He wrote that the Communications Act which gives the FCC its regulatory authority “does not give the FCC the right to sentence innocent people to death without any due process,” and argued that the FCC’s preemption overreach is an “administrative absolutism not congenial to our law-making traditions.”

Every house in the U.S. currently has access to some kind of broadband Internet for about $60 a month and without causing harm to others. The unessential advantage the OTARD amendment offers to users is more options. In light of this, CHD’s brief argues the FCC failed to explain why these fundamental American traditions must be swept away in the name of ubiquitous and redundant deployment.

According to the brief, the amended rule violation of Constitutional rights includes violation of personal rights and liberties secured by the First, Fourth, Fifth, Eighth, Ninth and Tenth Amendments and other rights that have been recognized by the Supreme Court as fundamental, and thus protected as well. These include:the rights to “life,” “property” and “liberty,” which includes “bodily integrity” and privacy-related rights.

CHD’s submission includes a real-life example of the effects of the rule amendment. Dr. David Hoffman’s affidavit was filed with CHD’s brief. The affidavit provides photographs of a massive base station antenna structure that was installed in his parents’ neighbors backyard.

This antenna is authorized by the OTARD rule amendment. Since the installation, his parents have been suffering various health issues and his daughter, who suffers from radiation sickness, can no longer visit them. She develops symptoms every time she visits her grandparents.

According to Dr. Hoffman, in return for allowing the antennas’ installation, which includes four powerful transmitting antennas (as seen in the image above) that transmit over a 3-5 mile radius, the neighbor receives free internet service. Because of the amended OTARD rule, Hoffman and his parents cannot do anything about this irradiation except beg their neighbor to discontinue his agreement with the company, which the neighbor has refused to do.

Under the new rule, the Hoffman family cannot sue the neighbor or the company for nuisance or for any other property or health-related damage. They cannot even sue for disability accommodations. The new amendment has eliminated all their rights.

According to CHD’s brief, the new OTARD rule leads to a wide range of policy, legal and practical difficulties that the FCC did not meaningfully consider. The brief says: “The commission gets a gold star for inventiveness. But it failed on the ‘thinking this through’ part.”

However, when it comes to the elimination of rights of those who have been injured by this radiation and who are treated as a “barrier” for deployment by the FCC, CHD claims that the FCC’s actions were “purposeful, knowing, calculated and deliberate.”

In the conclusion of the affidavit on behalf of CHD, Tachover wrote:

“With this rule amendment, the FCC harms those who are the most vulnerable and takes away their right to exist, even in their home. The effects of the FCC rule amendment are egregious, and morally and legally unconscionable.”

She concluded by quoting Gandhi: “The true measure of any society can be found in how it treats its most vulnerable members.”

CHD asked the court to vacate the rule.

The petitioners filed a motion requesting to have oral arguments in the case. The FCC’s brief is due on Aug. 23 and CHD will be able to reply to the FCC’s brief by Sept. 14. A three-judge panel will be assigned to the case after the conclusion of the briefing stage.