A fresh perspective on 5G in the US sheds light on how regulatory decisions, geo-political tensions, and suboptimal network configurations, contributed to a disappointing year in 2020.

Note: All of the Wireless speeds discussed below are far below the speeds needed to close the Digital Divide. Americans need symmetric broadband at 100 Mbps Up/100 Mpbs down The best way to achieve 100 Mbps symmetric service is via wired broadband directly to homes — Fiber direct, Fiber/coaxial or Fiber/Fast DSL copper.The U.S. Government agrees!

“Under the Interim Final Rule, eligible projects are expected to be designed to deliver, upon project completion, service that reliably meets or exceeds symmetrical upload and download speeds of 100 Mbps. . . . In setting these standards, Treasury identified speeds necessary to ensure that broadband infrastructure is sufficient to enable users to generally meet household needs, including the ability to support the simultaneous use of work, education, and health applications, and also sufficiently robust to meet increasing household demands for bandwidth.”

2020 was supposed to be the year in which 5G revolutionized the telecommunications industry, with breakneck speeds and super-low latencies. Everyone – from chip manufacturers to cellular carriers and smartphone brands – promised how amazing 5G would be. That didn’t materialize. The real-world results of 5G, to date, have been underwhelming — not much better than 4G, which can already achieve 50 Mbps.

In 2020, 5G speeds in the US did not come anywhere close to the promised download speeds, where available (just 2x . . . NOT 25x faster than 4G!, as advertised). Data collected from October 1, 2020 to December 31, 2020 by our speed test, which measures the quality of Internet connections on millions of devices yearly, shows that 5G networks in the US did not deliver.

States and Localities Are Being Bamboozled, Once Again, with the Wireless Industry’s, Over-Promise, Under-Deliver Bait-and-Switch Schemes

Well-respected technology journalists, Jon Brodkin of Ars Technica and Karl Bode of Tech Dirt have already documented in 2020 that for both Verizon and AT&T, their 5G has been slower than 4G!. These real-world results have caused the companies to make two strategic changes: 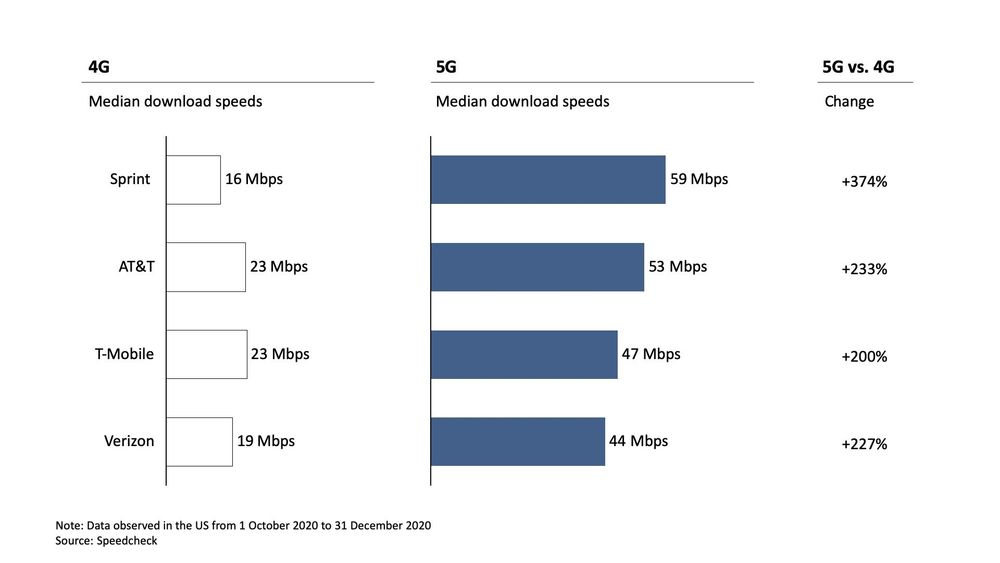 5G download speeds across the country were no faster than 4G speeds — our real-world results are certainly disappointing. In some cases, 5G was even slower than 4G: in 1 out of 8 US cities where 5G was available last year, 4G-connected users could browse the Internet faster than 5G-connected ones, leaving many 5G-phone owners puzzled.

An in-depth analysis of the data reveals that 5G users experienced faster connections in only ⅔ of the cities including big cities like Los Angeles where the new technology was deployed last year. In the remaining ⅓ of the cities, the new cellular technology was slower than 4G — not good enough for consumers to justify an early purchase of a 5G-enabled phone.

In Q4 2020, No Carrier Lived Up to Expectations

In the fourth quarter of 2020, Sprint (which started merging its operations with T-Mobile in April last year) offered the fastest 5G across the country (with median download speeds of 60Mbps, or 24% higher than the nationwide median figures), as the operator was the only one to have rolled out a 5G network on the 2.5GHz mid-frequency band.

AT&T, with median 5G speeds of 53Mbps, did a good job at combining low-frequency bands – to provide its rural subscribers with a solid coverage layer – and millimeter waves (mmWave) – to offer a true 5G experience only in small pockets within certain cities.

T-Mobile delivered median 5G speeds of 47Mbps, that is 13% lower than AT&T, as the carrier relied heavily on low-frequency signals, which travel far and wide but do not carry vast amounts of data.

Verizon – somewhat surprisingly – offered median 5G download speeds of only 44Mbps despite having the highest share of the 28GH high-frequency band (mmWave) — which has achieved only 0.6% penetration in the US. — https://youtu.be/PeA7S3XY56I

Overall, in the last quarter of 2020, mobile users in the US experienced only marginal improvements in 4G/5G service, witnessing download speeds. 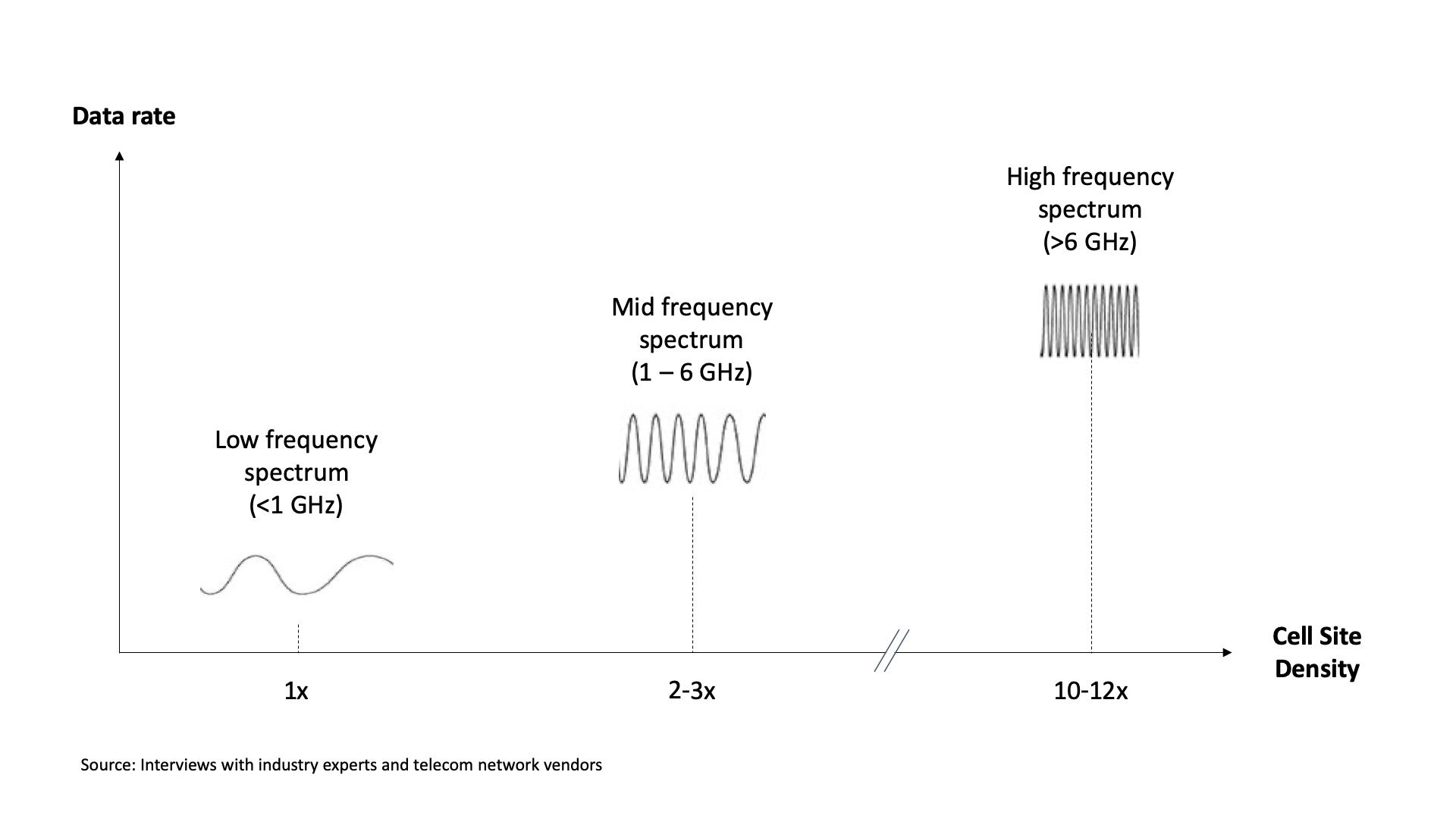 Four Reasons Why 5G Has Not Delivered

In January, the US Federal Commission Communications (FCC) completed a spectrum auction of C-band spectrum, which is mid-band (around 3,500 MHz). The major US carriers and other service providers bid a staggering USD $81 billion for the licensing rights to use this spectrum, shattering the country’s previous auction record for 4G LTE back in 2015.

The future of 5G in the US is in mid-band — NOT millimeter wave spectrum. This means that 3,500 MHz can be deployed on traditional macro towers and there is no need for Wireless Telecommunications Facilities (WTFs) on utility poles, light poles and traffic light poles throughout communities — which was just a deceptive ploy to get access to cheap real estate.

T-Mobile has already expanded the reach of its mid-band 5G service using 2.5 GHz spectrum acquired through the Sprint merger, claiming to have now both the largest and the fastest 5G network in the country. Verizon and AT&T will look to use the newly acquired spectrum to further increase their 5G capacity, in a bid to catch up and compete with T-Mobile.

The near-term challenge for Verizon and AT&T is that this newly licensed spectrum will be released in waves over the next few years. Some industry analysts have correctly pointed out that US operators might face the same crushing debt that ruined many European operators after they collectively spent USD 129 billion on 3G spectrum licenses in the early 2000s.